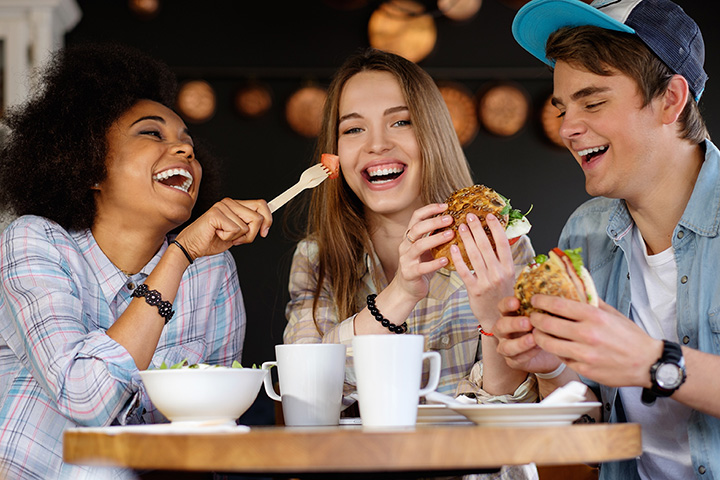 When in college and trying to manage a hectic schedule, you’re going to need restaurants, pubs, and cafes, to be open at odd hours of the night. To celebrate a big Sooners win, grab a bite after the bar, or munch on some brain food during a late study session, head out to one of these great Oklahoma eateries.

For quick bites from a place that has a long history in the town, pull into this drive-in on Lindsey Street. It’s open until 11 p.m. If you’ve never experienced a drive-in, you should put this place on your bucket list.

Blu is a wine bar with a full menu served until 11:30 p.m. It’s southern cuisine with a modern twist. Vegetarians will enjoy the roasted quinoa and veggie stack, but there’s a lot of interesting entrees available.

Great burgers. Fresh-cut fries. Arcade games and TVs. It’s open until midnight. If you’re not in the mood for a burger, you’ll find tacos and hot dogs, too. It’s just a nice place to relax after some evening chores or a late-night class.

The Mont is known for its beautiful landscaped patio, but this Mexican restaurant has a late-night menu served until 1 a.m. Save room for the white chocolate raspberry cheesecake.

Nice day for a patio and a swirl #instaaddict #igers #instafoodie

At Das Boot Camp, you’ll find traditional German dishes and beer, served until midnight. It has the feel of a German pub, so you can be transported after a long day of classes and studying. It’s a favorite local hangout for college students and locals.

Pickleman’s is not only open late form gourmet sandwiches, salads and thin-crust pizzas, but it also delivers until 2 a.m. Sunday through Wednesday, and until 3 a.m. Thursday through Saturday.

Pizza Shuttle is open until 2 a.m. and delivers quickly to give you some good food when you want it. It’s been serving pizza in the Norman area since 1981 and has three locations around town proving that the locals support it.

Pub W makes most of its food in house from scratch. They have an extensive menu with burgers, sandwiches and traditional entrees, like chicken fried steak, baked salmon and carnitas tacos. Try the squashpuppies at least once.

Bison Witches calls itself a “small neighborhood hangout.” It serves gourmet deli sandwiches, bread bowl soups and salads, along with traditional bar drinks, but it’s an untraditional bar. Go because it’s a great name, but come back because the food is awesome!