The 9 Best Historic Theaters in Oklahoma! 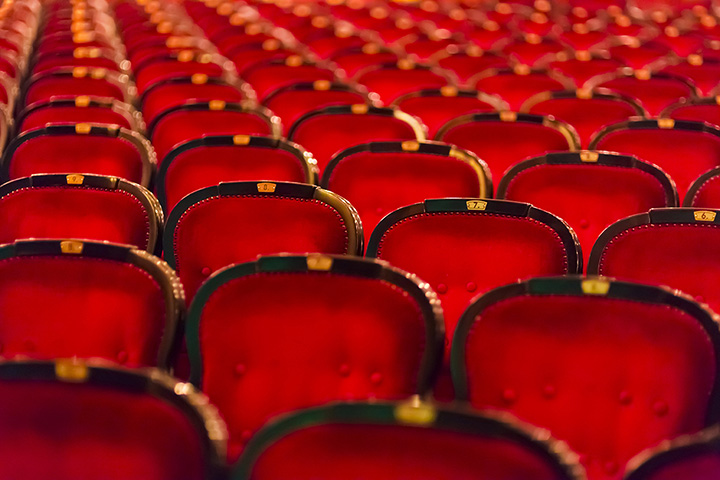 Live performance and the movie-going experience are alive and well in Oklahoma, thanks in part to the incredible historic theaters that have been entertaining local communities for decades. Each with a unique story to tell, here are the most fascinating historic theaters in the state.

This theater boasts a breathtaking one-ton chandelier in its elegant Louis XV interior. It’s said that there isn’t a bad seat in the house. The Miami Little Theatre Company often holds stage performances, but you can always plan a group outing to catch dinner and a classic movie.

This historic theatre is the “oldest continually operated movie theatre in Oklahoma.” It was opened in 1915 as a live performance hall, but as the movie industry became more prominent, this theatre brought blockbusters to southern Oklahomans.

This beautiful performance hall was built in the 1920s to bring silent films and vaudeville acts Oklahomans. Blake Shelton was a regular performer here before he became a country star. Many of Oklahoma’s most famous musicians have graced its stage. Don’t miss the art gallery on the second floor when you visit.

This historic theater specializes in indie, foreign and documentary films that aren’t mainstream. It’s listed on the National Register of Historic Places, because its architecture is so unique for Oklahoma. It’s going strong today, offering one-of-a-kind screenings, special events and film festivals, like the annual Oklahoma Jewish Film Festival.

This historic theatre opened in 1929, offering the opportunity for Oklahomans in the area to hear “talkies.” The architecture is Spanish Gothic. The interior features mosaic tile and Italian marble. Today, it hosts all types of stage events, from ballet, children’s theater and concerts.

This theatre opened in 1927. Over the past 90 years, many legends have graced it stage, John Phillips Sousa, Will Rogers and Roy Clark. The theatre has been restored with its original look, but updated to have modern technology, making it one of the most prominent theaters in Oklahoma.

As one of the oldest working theaters in Oklahoma, the Constantine Theater also boasts an apparition that haunts audiences today. Originally, it was a hotel, but C.C. Constantine bought it in 1911 to turn it into an opera house. His daughter’s ghost is often seen and heard in the building.

Enjoy movies in an Art Deco building that will transport you back to the early days of film while you watch a blockbuster new release. It was opened in 1920 as an opera house, but today moviegoers of all ages come to catch a movie.

Guthrie is probably the most quintessential historic town in Oklahoma, and this theatre lives up to the hype. The theatre was originally built in 1901, but not converted to a theatre until 1919. In its heyday, it hosted vaudeville acts and silent films. When talkies came out, the theatre was renovated for movies only. Today, it’s used as a live venue for professional productions.

1829 Airport Drive, Shawnee, OK
About: SLT has provided seasons full of musicals, comedies, dramas and more since 1967. In 1976, the current building was completed, and a visit f... Read More

204 North Robinson Avenue, Suite 1950, Oklahoma City, OK
Mission Statement: To unite and support all community theatres, organizations and participants, in Oklahoma; and to further connect them with othe... Read More

3110 N Walker Ave (at NW 30th St), Oklahoma City, OK
About Us:Ghostlight was formed with the primary intention of producing quality, thought provoking theatre for Oklahoma City audiences that they may... Read More

3700 North Walker, Oklahoma City, OK
History:The Jewel Box Theatre has over 54 years been a center of creative activity for Oklahomans who love theater. Teens who participated in Jewel... Read More

Oklahoma Shakespeare in the Park

12201 N Western Ave, Oklahoma City, OK
Our Mission is to inspire, engage, entertain, and challenge audiences with theatrical productions that range from the classics to new works; to tra... Read More

1727 NorthWest 16th Street, Oklahoma City, OK
Mission:The mission of Lyric Theatre of Oklahoma is to produce quality professional theatre; to encourage and educate talented individuals; to prom... Read More
Show More
Select a Oklahoma town to find
the Best Things-To-Do and Places To Go around you